The U.S. Postal Service Honors Tap Dance on a New Series of Stamps

How do you capture the history and vitality of tap dance on a postage stamp?

That was the question Dr. Janet Schroeder wrestled with when, in late 2019, a company that contracts with the United States Postal Service on stamp design asked her to serve as a subject-matter consultant as it considered a new stamp depicting tap. A former dancer with the Dayton-based Rhythm in Shoes, Schroeder recently received a doctorate from Ohio State University for research examining the migration of rhythm tap and Appalachian step dance from vernacular to stage forms. 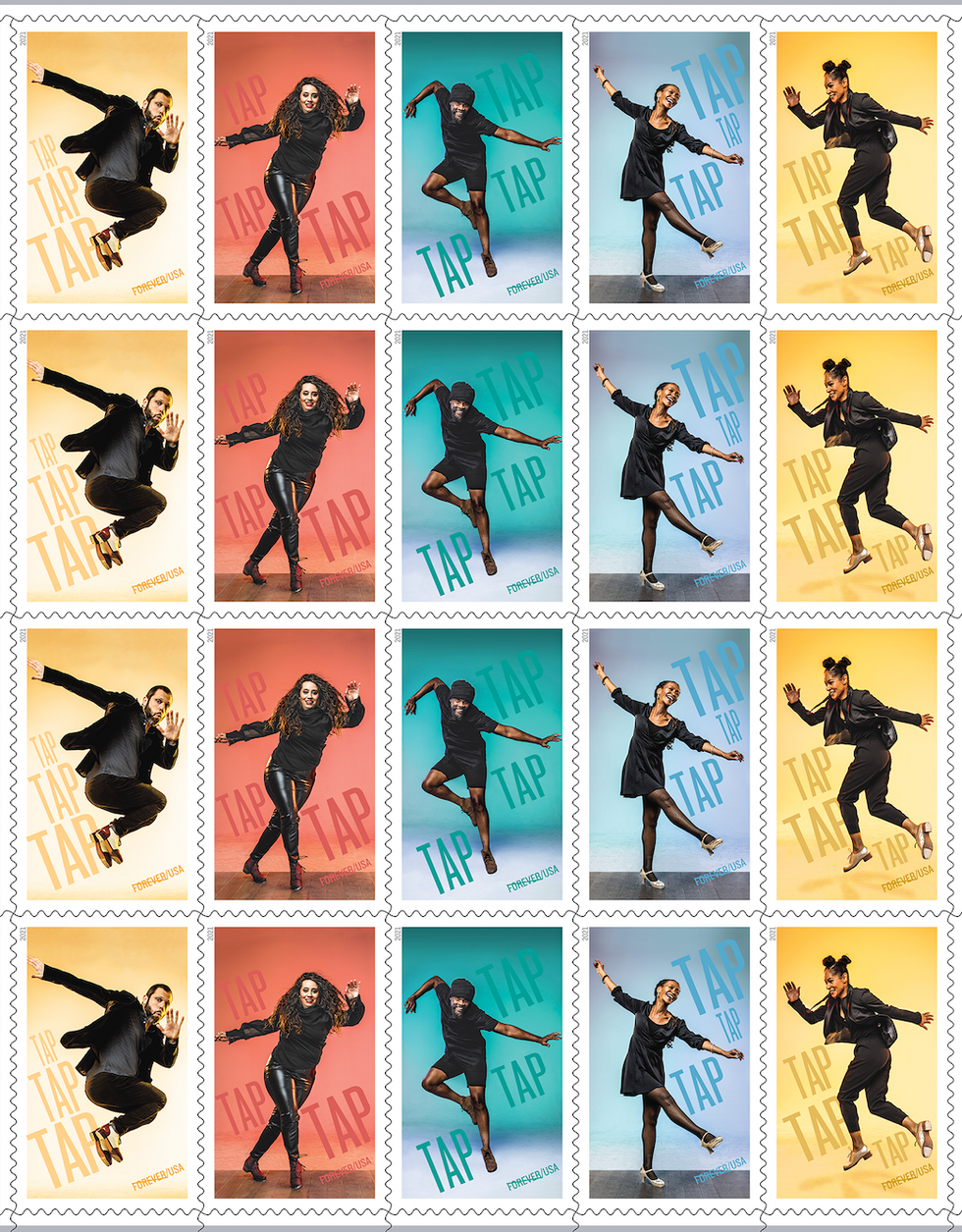 
“Tap dance is identified as an American art form,” Schroeder says she told the committee. “The racial–cultural blending—musically, physically, rhythmically—through the movements is so vital to tap dance as a form and also to thinking about the history of America.”

Longtime postage stamp designer Ethel Kessler was art director for the project. On Schroeder’s recommendation, Kessler reached out to New York City photographer Matthew Murphy, known for his kinetic shots of Broadway performers and shows. (You may recognize his iconic image of Lin-Manuel Miranda for the Hamilton poster.) The son of an actor and a tap dance teacher, Murphy grew up in dance studios. While he focused on ballet, he took tap with his mom, Linda, and others during his teen years. He danced with American Ballet Theatre from 2003 to 2008, and now devotes himself to Broadway and theater photography.

When the Postal Service contacted him, “Right away I was so excited,” Murphy says. “To get to honor that community with something as iconic as a stamp that is seen across the country is so exciting for me.”

In designing the stamps, Kessler—who had taken tap recreationally as an adult—aimed to capture both tap dance’s historic legacy as well its evolution to the contemporary stage. She says she wanted to include a sense of tap’s musicality even with each stamp’s small size. Her solution: a typographic treatment of the word “tap” in varying sizes and weights dances across the background.

As for the dancers photographed for the stamps, Murphy relied on his sister, Carson Murphy, a member of Dorrance Dance, to connect him with some of today’s most exciting tap dancers. During the two shoots, Murphy estimates he took about 2,000 photos. “It’s such a challenge to photograph tap well,” he explains, “because it is sound-based. You have to really collaborate with the dancers to make sure that the shape of the physicality is readable.”

That posed a challenge for Kessler, who couldn’t settle on a single photo to capture the energy of tap. Thus the 2021 stamp sheet features five different dancers shot in midair or mid-shuffle: Dormeshia, Derick K. Grant, Ayodele Casel, Michela Marino Lerman and Max Pollak. Because postal regulations prohibit honoring a living person on any stamp, these dancers honor tap as representatives of the art form. Despite being stars in the dance world, they are unnamed on their stamps.

“By featuring photographs of these talented dancers, the U.S. Postal Service intends to honor this important American dance form and, by extension, all tap dancers, past and present, who have made tap dancing a dynamic art that continues to evolve in response to new cultural influences,” a spokesperson for the USPS noted.

When Schroeder looks at the stamps, she says, “One of the core values of tap is innovation, both over time and in the moment. In 2021, to have this very current representation of tap on a United States postage stamp is amazing.”

The first-day-of-issue ceremony will be on July 8, 2021, during the New York City Tap Festival. The event will be held in-person at the Peter Norton Symphony Space, and streamed live on the Postal Service’s Facebook and Twitter feeds. Though, of course, the live ceremony is subject to change depending on local pandemic restrictions in July. Visit the USPS site to check.