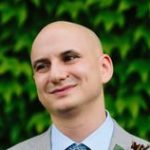 Although Maria Dalanno, 18, has technically made her Broadway debut, she only got to do three preview performances.

“I performed on the Broadway stage, and it was the most amazing feeling ever,” she says. “I’d say that counts.”

When the pandemic took New York by storm in mid-March, Dalanno was already in her own whirlwind. Six weeks before, she had just wrapped up auditioning for university musical theater programs and had been accepted to the University of Michigan when she saw a Facebook post for an open call to understudy the featured role of Lydia in Mrs. Doubtfire on Broadway.

She sent in a tape on February 3. On February 6, she traveled to New York City for two rounds of callbacks and got the part on February 7. She had three days to move to New York from Ohio to start rehearsing.

“It was the craziest thing,” she says.

She joined the company with one month to learn her ensemble track and the role of Lydia, all while adjusting to living in New York on her own. She wasn’t thinking much about the coronavirus when previews opened on March 9. On March 12, her brother asked her what would happen if New York implemented a ‘pause’ order.

“I said, ‘Oh no, that won’t happen. It’ll be fine,” she says. Later that day, all Broadway shows announced a one-month closure that turned into an indefinite shut down. “It was the most emotional day. We were hot messes at the theater, crying so hard,” says Dalanno. “For me it was a big reality shock. I was thrown into my dream career so fast, and then just as fast, it stopped.”

She returned home to Ohio to wait out the pandemi­c with her family, but kept her apartment in New York, hoping to return. She keeps in touch with Analise Scarpaci, who plays Lydia in the show, and says she keeps singing the song led by Lydia, “What the Hell,” around her house. She’s also considering taking some college courses online.

Because Dalanno initially left Ohio so fast, she didn’t get to say goodbye to friends, family and her dog, so she’s glad to have some quality time with them now. Though not all shows will return once Broadway reopens, she thinks about the show a lot, hoping to still get a chance to perform the role of Lydia. Whatever her career holds, she knows she’s had a big lesson in being resilient in the face of the ups and downs of the theater world.

“Nothing is guaranteed, even when it seems like you’ve arrived somewhere,” she says.