Can We Get Rid of the Awkwardness Surrounding Dance Belts? When I was 13, I was in a class with boys who were a few years older than me at the School of American Ballet. One day before class, I gave a little sass to a 16-year-old classmate who was swinging his leg as his warm up, showing off his flexibility.

“Wear those briefs,” he replies.

My face went beet-red. Was I supposed to be wearing a dance belt? I was sure I was too young, but I asked a friend of mine just in case. He told me, gracefully, that yes, I needed one and that it was a topic of some discussion among my older peers.

Even though I had been at SAB for three years, when to wear a dance belt had never been discussed.

It’s hard enough to deal with the teasing and social discomfort of being a male dancer in your early teens, and talking about a dance belt with someone, let alone wearing one, was something I was happy to put off.

But, after that fateful pre-class warm up, I got myself a dance belt. However, the awkwardness didn’t end there. I first wore a style that was comfortable, but too loose, then one that was too tight. I learned that the hard way when a colleague whispered to me during a run-through, “one ball is out.”

In my nine years of training and six years in ballet companies, no one ever talked about how to find the right fit or style for my body.

It seemed the topic was too awkward for anyone to talk about back then. So, how are things now?

At SAB, the situation seems to be the same. Amy Bordy, director of public relations at the school, says via email that, “There continues to be no formal or official advice given to students about dance belts.”

But the tides of awkwardness for young male dancers are starting to turn.

Kiyon Ross, who graduated from SAB a couple years before I did, went on to have a career at Pacific Northwest Ballet and is now on the faculty there. He says that he talks to his 11-year-old boys about dance belts.

“I bring one in and explain what it is. Some have never seen one before,” Ross says. “It takes the weirdness and mystery out of it.”

He recommends brands and sizes to them and offers feedback. 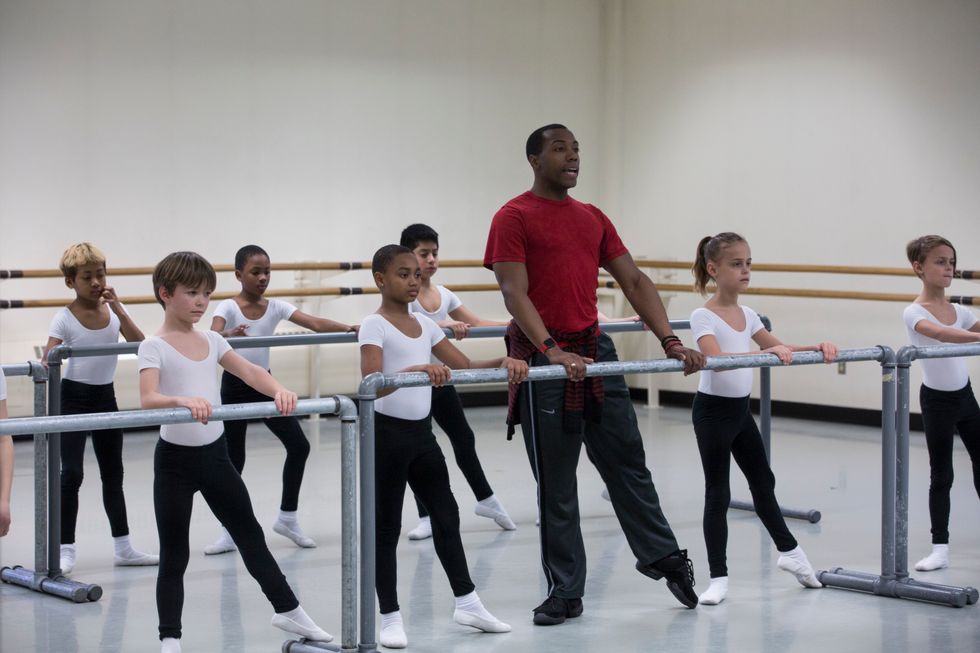 Ross says that when he was in his early teens in Baltimore, no one spoke with him about dance belts. He describes going to a local dance shop where a woman handed him all the different sizes and styles she had and he tried them all over his underwear.

“I just remember she kept giving me all these sizes that were bigger and bigger,” he says with a laugh-cringe. “They clearly were not going to fit.”

Beyond getting the right fit and preferred style, a male dancer needs to know how to organize their anatomy in the dance belt.

“We talk about how the private parts fit in. I tell them that it’s not like underwear,” Ross says. “You have to fix it so it goes in the upward direction.”

Tom Kilps, a former dancer with Texas Ballet Theater and founder of the dance belt line Dance Jox is even more direct than Ross. His website has an instructional page that reads:

“As you reach into the pouch, pull everything upwards and make sure the testicles are at the front with everything else pointing upwards. Your penis is supposed to end up facing towards 12 o’clock.”

I didn’t figure this out until I was 16, when I heard a dancer make fun of another boy who was doing this wrong. Perhaps it was passive-aggressively meant for me.

Kilps says he founded Dance Jox because he was unhappy with the options he had when he was dancing. He’s been refining the product for five years, adding features such as quick-dry material, four-way stretch in the thong and a seam down the middle of the front pouch to match the seam in most tights.

He also says his product makes male dancers feel less “on display,” and is a better option than wearing two dance belts in an effort to be modest, which is not uncommon.

“I’ve heard directors comment on some dancers that their ‘bump’ is distracting,” Kilps says. “You want to see the dancer, not their junk.”

Dance Jox dance belts come in a wide variety of sizes, from small to 2XL to help dancers of all body types feel comfortable. He also sells them in a darker flesh tone for dancers of color.

Ross, who is black, says that when he was performing with PNB, the costume shop would have to dye his dance belts for ballets with light colored tights or with no shirt where the waistband might show.

“Just like pointe shoes, it’s important to have color options,” Ross says. “Not everyone will have access to a custom shop to dye to the right color.” Kilps also had a less-than-ideal experience as 14-year-old buying his first dance belt. Like Ross, he went to his local dance shop in his hometown of Madison, Wisconsin, that was “pink everywhere.” He didn’t even know what a dance belt was when a woman at the store handed him one.

Kilps tries to help younger dancers with their first dance belt purchase, and that often means talking about dance belts with the mom.

Nicola Hudson’s son Rhys first took ballet class in his boxer shorts, but he when he was about 12, the school told her she needed to buy him a dance belt.

“I didn’t really know much about what to get him and I didn’t find too much information online,” Hudson says. “I just bought one with good reviews.”

She says that buying from a typical dance store wasn’t ideal because they just, “read the product label and can’t tell you much more.” She says finding Kilps was useful because she could talk to someone who knew the experience of wearing a dance belt.

Getting comfortable wearing tights and having your anatomy on display can be challenging for a young male dancer, who is probably already facing at least some bullying for studying dance. This makes it even more important for a young male dancers to have guidance and minimize the awkwardness around dance belts.

“For teachers who do have boys, it’s important not to shy away from the topic,” Ross advises. “It’s part of our culture as male dancers, it needs to be normalized.”

While dance belts can only be so comfortable, they are a fact of life if you want to pursue a career in dance—at least for awhile.

Asked if he still wears dance belts these days as a teacher, Ross laughs.