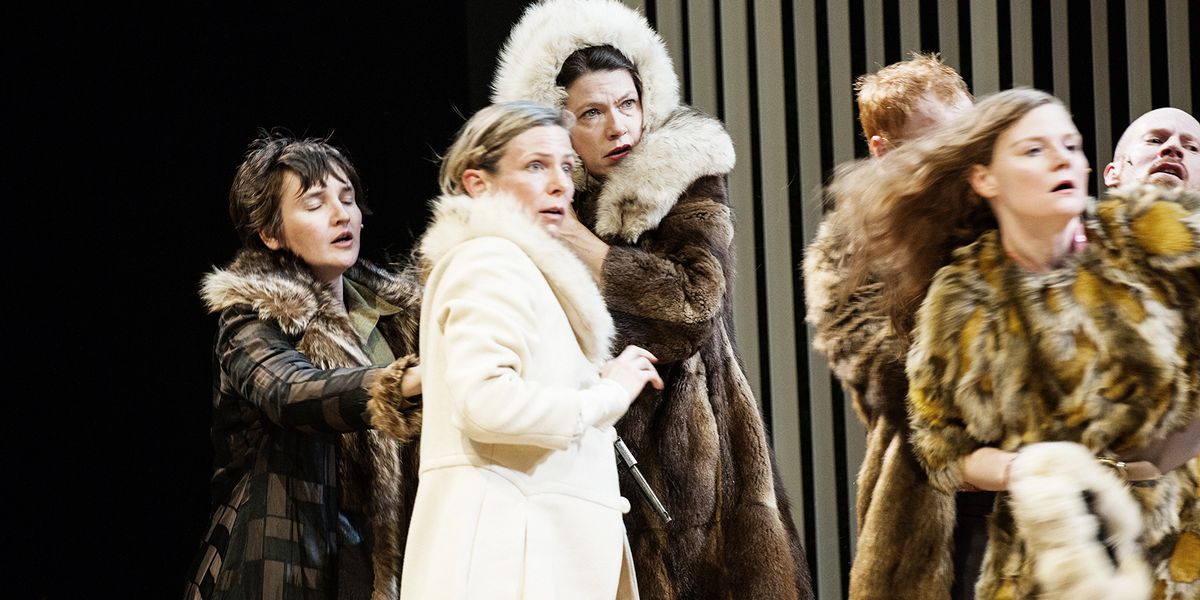 What Is “Dance Theater”

What is “dance theater”? Is it Pina Bausch’s raw examinations of everyday life? Is it performance that mixes movement and text? Is it dance that tells a story? Dance Magazine talked with four choreographers who use elements of dance and theater—but whose work escapes easy categorization—about playing with narrative, integrating movement and words, and what “dance theater” means to them.

Dance theater, to me personally, means that there’s no hierarchy of materials you can use to make a piece. Movement is not more important; text and narrative aren’t more important. I feel this complete free range as I try to express something, to use a whole variety of theatrical elements, like relationship, cause and effect, clothes, dance, singing, talking, found text, plays, literature—this cornucopia of theatrical possibilities. Having said that, the contradiction is that I think dance is the most important thing. Dance is sacred. So even though everything’s equal, what really needs to be preserved is dance, because it’s the most fundamental element at hand.

I don’t know why dance and theater ever separated in the first place. Since the ancient Greeks, they’ve been united. That theater became this thing where people sit on couches and move their mouths—to me it’s insane, so unexpressive. One thing that attracted me to Samuel Pepys [the 17-century English diarist and inspiration for Big Dance Theater’s new work, 17c] is that when he went to the theater, he described the dances. He’s seeing Shakespeare, first- and second-generation Shakespeare, and he’s saying, “Well, the play was bad, but the dances were really good.” It didn’t look like theater does now. They danced!

I don’t call my work dance theater, but I am borrowing super-liberally from both disciplines. Both have to do with language, embodied language, these multiple utterances that have different forms and shapes that I hope will collide with each other. Generally I start with text. Once I’ve written something, I try to think about particular gestures or if there’s some kind of movement that resonates with what I’ve been writing. In working on my piece Bronx Gothic, I came out with this vibrating gesture, something related to a twerk and a twerk gone wrong and the question of how long can that be sustained.

When I move away from written language and go into a space of movement, it’s a very open and yummy space where I just follow my body, but it’s anchored somewhere in this text that I have floating in the back of my mind, a word or an idea. It’s like going into a really wide field, and you don’t know which way you’re going to go. You can stay in one place, but it’s quite spacious.

I find dance theater to be a difficult term. When theater-based people use movement, they don’t call it “theater dance.” They might say “physical theater” or “experimental theater.” It’s funny, the qualifications that seem to happen when dance-based artists work outside of dance. I relate more to the word performance—it’s more open—and the idea of grabbing from whatever’s needed to make the work. Whether there are words or no words, music or no music, it’s all interrelated and coming from a similar source of a desire to create. I’m really interested in story, but I have very little interest in plot or telling a story. I’m more concerned with the efforts of storytelling, the labor to convey meaning, the sense of going on a journey through something and just riding that feeling, without necessarily a linear comprehension of it.

When I came here [to New York, from Brazil] I started studying with the people from Twyla Tharp’s company. The investigation of movement and the problems it would offer up, like your arms do 7 counts, your legs do 3, the impossibility of those coordinations—that was my first love. At the same time I was very attracted to humor and interested in process, exposing the process of making something and the accidents in a rehearsal and the absurdity of it. Early on I did a piece based on an Ionesco play, in which Peter Richards and I were two old ladies. We were looking at absurd theater as a way to break from formal movement, which seemed like it was done, exhausted. I don’t know if you’d call what we did dance theater, but it was very theatrical.

If I wasn’t borrowing from famous playwrights, I was repeating verbatim what had happened in the studio; I wasn’t trying to be a writer. But in 1993 I got together with George [Emilio Sanchez], an actor and writer doing solo performance at this moment of identity politics. I was interested in that, too, so the work became much more political. We’ve worked together for over 20 years, and it’s the most excruciating difficulty—the competition between us, and the difficulties of what’s more important, the words or the movement?