Naked & Unafraid: Everything You Need to Know About Dancing Nude


Sebastian Abarbanell remembers being asked as an undergrad at Trinity Laban in London to perform wearing only a dance belt. “I said no,” he says, “because I felt uncomfortable.” Now a performer with Sidra Bell Dance New York, he’s performed partially nude several times, without reservation. The difference? “It comes with more experience and maturing as a dancer,” he says. “When you see a dancer living in their skin, you don’t need to put anything else on them. When I said no in college, I wasn’t in my skin yet.”

Getting in your skin—and getting comfortable wearing only your skin onstage—requires a particular alchemy of vulnerability, agency, preparation and practice.

Should You Do It? Jonathan Campbell, co-artistic director of queer contemporary dance company MADBOOTS, says that understanding the reasoning behind the lack of costume allows him to “offer my body that way, and it becomes a little less scary.”

Familiarity with a choreographer’s work and aesthetic helps with readiness too. Jennifer Nugent’s experiences performing in Bill T. Jones’ Continuous Replay both in 2005, as a guest artist, and in 2010, as a full company member, felt very different. The second time around, she says, “I knew a little more history about the piece—how it came to be nude, who created the gestures. I had a different entry into my body and being nude. I felt more in charge of my presence.” The idea of saying no to a choreographer can seem daunting. You want to hew to their vision—but certainly not at the expense of doing something you don’t feel comfortable with.

If you feel uneasy, Campbell and MADBOOTS’ other co-artistic director, Austin Diaz, recommend airing any reservations with the choreographer or director. “It’s your body, and you have a say in how it is seen,” says Diaz. Know that you have options, whether that’s to flat-out refuse to perform nude or try nudity in steps and see how you feel at each threshold.

Abarbanell, for one, counts on his trust of Bell as a director—and her mutual trust of him as a dancer—to know that a decision to perform nude is right. “That’s vital when you’re working in this space,” he says. Adjust to the temperature of the stage in advance, recommends MADBOOTS co-director Austin Diaz. Scott Shaw via joyce.org

Nothing can fully prepare you for dancing nude in front of an audience. “You are extremely vulnerable in that moment,” says Diaz.

But Campbell suggests a starting point could be experiencing nudity on your own, alone in the studio. That way, you’ll be “in a familiar space, but without clothes.” Another option is to rehearse as barely clothed as possible, so that full nudity won’t feel like as big of a difference later on.

Diaz also recommends adjusting to the temperature of the performance space well before going onstage. “I think a lot of dancers wait till the very last minute to undress,” he says, “which shocks the body.” 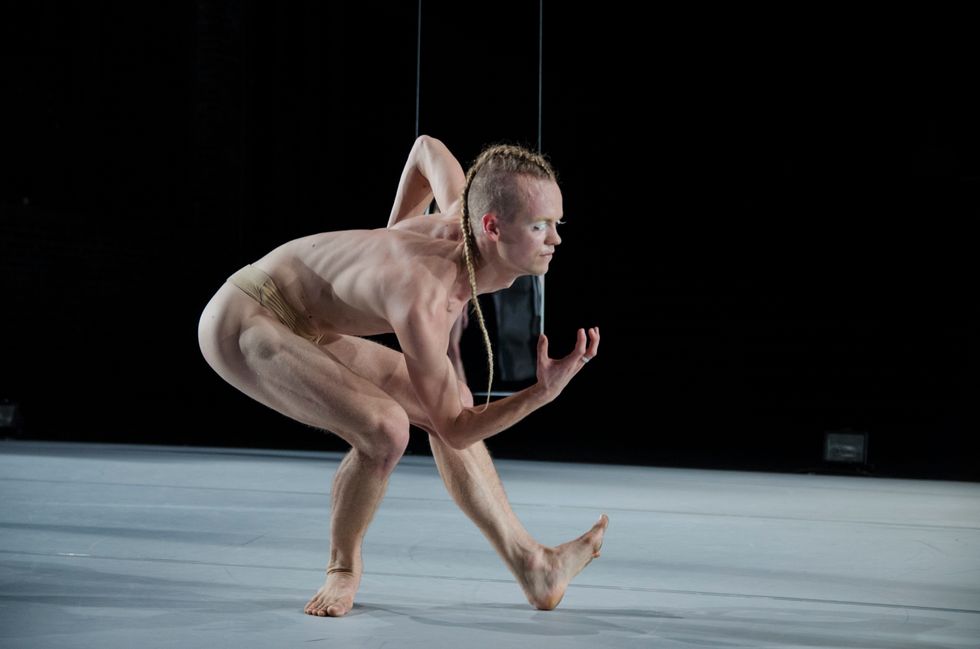 You can count on a heightened sensitivity when performing without clothing. “I feel much more aware of my entire body,” Abarbanell says. “To increase the intensity is a really beautiful experience.”

For Diaz, dancing nude actually allows him to quiet his thoughts in a way he often can’t when performing in costume. “My mind goes to a different place when I’m performing nude,” he says. “I’m a little more in my head when I’m clothed.” In the end, Campbell says, “It’s a mind-set. Remember: It’s just anatomy.”