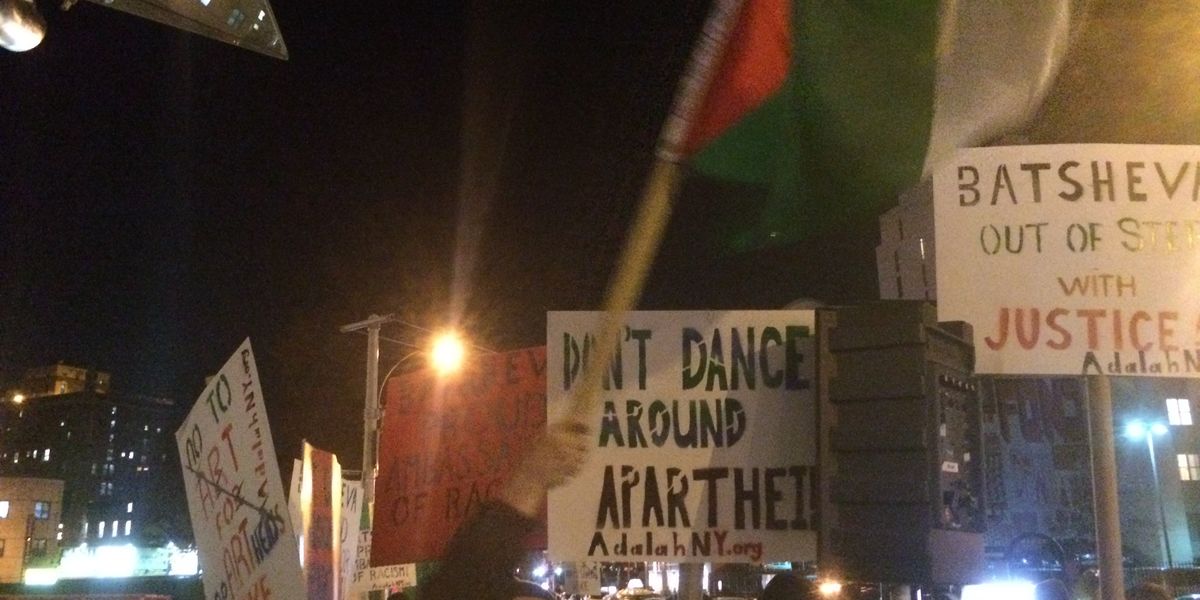 The United States has never had a strong tradition of government support for the arts. But we take what we can get and, since its founding in 1965, American artists have gratefully accepted whatever the National Endowment for the Arts is willing and able to give. Though the NEA has at times been aggressively politicized, for the most part, we have maintained a delicate separation of art and state.

There’s a general understanding that this government support doesn’t translate to endorsements of specific policies or a specific administration, nor is it a calculated attempt to distract from them. If funding came with such strings attached, surely many American artists would think twice about accepting it.

Yet when the Batsheva Dance Company, Israel’s premier dance troupe, comes to the U.S. this spring, it will be met by its many fans and, in some places, boisterous protests as in years past. The protestors oppose Israeli government policy and believe that Batsheva is guilty by association. They convey this message through signs wielded outside venues, flyers handed to arriving audience members and, occasionally, by interrupting performances. It has become an almost expected part of any Batsheva tour.

But why target a dance company? What does Batsheva have to do with Israel’s geopolitical conflicts? The protestors, who tend to be locally organized members of the larger Boycott, Divestment and Sanctions (BDS) movement against Israel, see Batsheva as a tool of the Israeli government’s efforts to distract from political controversies, such as the building of Jewish settlements in the West Bank. They argue that because Batsheva receives about 30 percent of its budget from the government, it is complicit with current Israeli government policies, as well as with Israel’s branding efforts to make audiences look the other way.

Responding in news articles and interviews, Ohad Naharin, the company’s renowned house choreographer, counters that the funding structure has been in place for decades and is independent of the policies of any particular government. The money comes from the taxpayers, he argues, and has long been earmarked for supporting the arts with no demands made of artists. Naharin is also an unabashedly outspoken critic of the current Israeli government, regularly stating that he sympathizes with the protestors’ grievances, just not their methods and targets.

Why are other prominent international companies not receiving the same scrutiny as Batsheva? The Bolshoi Ballet, which was founded in 1776, has been supported by the Russian government for centuries (approximately 70 percent of its budget). At the moment, the U.S. has accused Russia of ongoing human rights violations and of meddling in our democratic process. And yet, when the Bolshoi pays a visit, there are no protestors to be found. The same goes for dance companies from Cuba, whose Communist government we officially oppose, and from China, who we have also called out for its problematic human rights practices.

In fact, we look to artists from Russia, Cuba and China to find the humanity in countries whose governments we may oppose. Welcoming these companies allows us to see people, not policies. And through this artistic exchange comes opportunities for dialogue and a deeper understanding of the complexities that every nation faces, both internally and in its relationship with the world.

And it’s working. If the goal is to get people to talk about Israeli policy, well, here we are, talking about Israeli policy. And that’s not necessarily a bad thing. We should be connecting the dots between art and politics and the financial relationship between companies and their governments. If we see a troublesome trade-off at play—for example, government demands for loyalty, attempts at censorship or artists defending authoritarian regimes—we should hold those artists to task. But that’s not the case with Batsheva.

And we should also apply our scrutiny consistently. Looking at ourselves in the mirror, we would then have to ask whether an American artist receiving a grant from the NEA today would, by extension, be associated with the actions of our current administration. Most artists would—rightly—balk at the idea. So if we continue to insist on more government funding for the arts at home and also value and assert the separation of art and state here, we should allow conscientious artists abroad the right to do the same.