Meet the Man Behind Hugh Jackman's Moves in "The Greatest Showman"

A schoolgirl’s ballet recital, prancing circus horses, a Fred-and-Ginger ballroom homage, an aerial duet, even sheets flapping on laundry lines—in the new movie musical The Greatest Showman, Ashley Wallen choreographs them all, in service to a big, fanciful story based on the ups and downs of legendary 19th-century impresario P.T. Barnum. With Hugh Jackman, Michelle Williams, Zac Efron and Zendaya starring and dancing, songs by the Oscar- and Tony-winning composers Benj Pasek and Justin Paul, and a huge ensemble that includes “18 amazing dancers,” conjoined twins, a man with three legs, and Barnum’s other assorted sideshow attractions, Wallen calls it “a dream come true.” It took nearly eight years, beginning long before La La Land showed Hollywood that there was once again an audience for original film musicals, and well before anyone had heard of Pasek and Paul. Director Michael Gracey had never made a feature film, though he was well-known in commercial circles. Wallen had been a dancer in Moulin Rouge, but his stock in trade was also commercials, along with music videos and pop-star tours. It was in 2009 that Wallen, Gracey and Jackman first worked together, on a soft-drink commercial set in a Tokyo hotel. Jackman, dancing all the way, moves through the lobby, the kitchen, a shallow rooftop pool and then back to the lobby via an obstacle course of flapping sheets wielded by maids.

Elements of that tone, camerawork and choreography have echoes in The Greatest Showman, and Wallen, who’s called Ash, acknowledges it. “The way we shoot those dance numbers is very much the same as what we do in commercials,” he says. But he emphasizes the differences: “We’ve got a lot more story to tell in the film, and we’ve got longer to develop the characters and their journey with the dancers.”

Barnum’s journey, which took him from a hardscrabble Connecticut boyhood to great wealth and international fame, has inspired other films, as well as the 1980 Broadway musical Barnum. But Greatest Showman is less about the details of the promoter’s biography—he died in 1891, at 80—than it is a celebration of his pluck and his hoopla-happy sensibility. Imbued with Jackman’s innate charm, Barnum is a dreamer and a born entertainer, with an all-embracing view of humanity and a distinct flair for the eye-popping production number.

Despite the 19th-century trappings, the movie’s songs and dances are unapologetically modern—”contemporary with a classic vibe to it,” Wallen says. Most classic are its two lyrical duets, one on a New York tenement rooftop and the other airborne above an empty circus arena. In the first, Barnum and his wife, played by Michelle Williams, send the children off to bed and share a tender, soaring dance amid the clotheslines. In the second, Barnum’s circus partner, Zac Efron, is entranced by one of the performers, a beautiful trapeze artist portrayed by Zendaya, and they end up in a dizzying aerial embrace. Throughout the movie, the camera flies and dances too, spiraling among the circus acts and the audience, hovering over the big ensembles and the intimate couples alike.

The overhead shot in the three-ring extravaganza that closes the movie, Wallen says, was “a nightmare” to shoot, “because everyone has to be so perfect, and in a perfect place. Perfect!” With floor measurements determining everyone’s precise spot, as well as special accommodations for a Bearded Lady and her “massive, big dress,” a Three-Legged Man lugging his extra equipment, and the Siamese Twins, two actors co-habiting a single costume, the retakes mounted up—”You see one person out, and your eye goes straight towards them,” Wallen notes. “And we had confetti falling at the same time. We had so many elements to push through to get it right.”

The Australian-born choreographer was awed by the work the film’s stars put into getting their elements right. He says the grueling rehearsals with Williams left her sore, while Jackman’s insistence on “going over and over and over” things left Wallen tired. Their duet on the roof, even after a luxurious eight weeks of rehearsal, was a difficult shoot, too. “There are big lifts, and Michelle’s tall. It’s beautiful, but it’s actually quite athletic as well…and then we had to do the timing with the sheets,” he says. The dancing sheets are among the film’s many digitized effects—no animals were harmed, or even used, to film the CGI tigers and elephants. Wallen did help with the horses in the circus parade, though, and he laughs when he realizes, “I should add them to my resumé.” 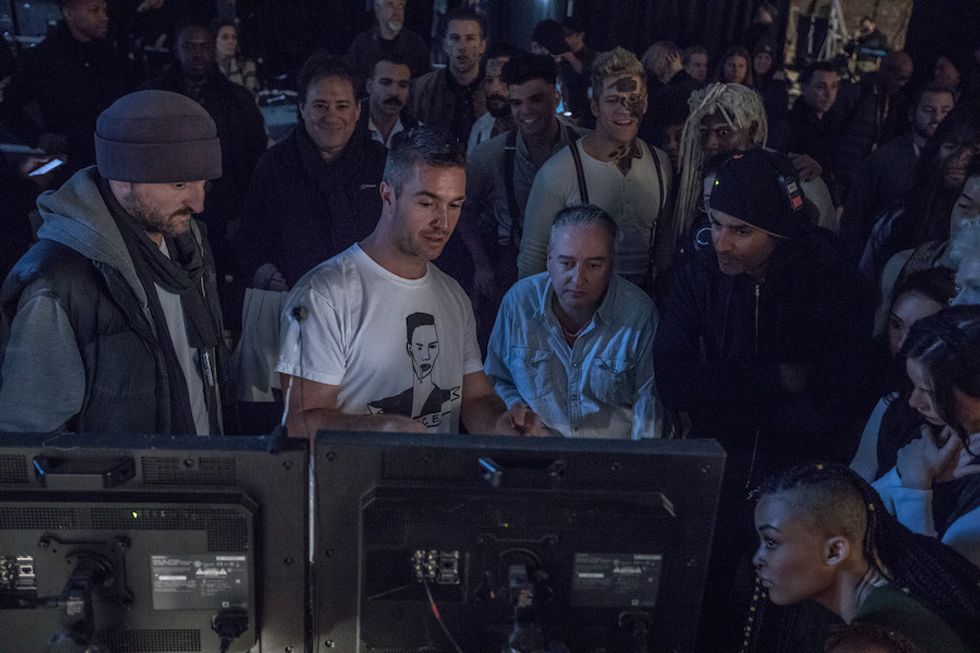 His resumé is something of a three-ring circus already, featuring pop stars like Kylie Minogue and Mariah Carey, a 25,000-strong flash mob for Oprah, the West End and Broadway productions of Ghost the Musical, and dance-competition TV shows overseas. Now, with The Greatest Showman in theaters December 20, he’s off to shoot some more music videos, and probably a lot more he doesn’t know about yet. Barnum started out hyping a small person he named Tom Thumb and ended up marketing the concert singer Jenny Lind, “the Swedish Nightingale.” So there’s no predicting where Wallen’s peripatetic talents will take him next—or if linens will be involved.