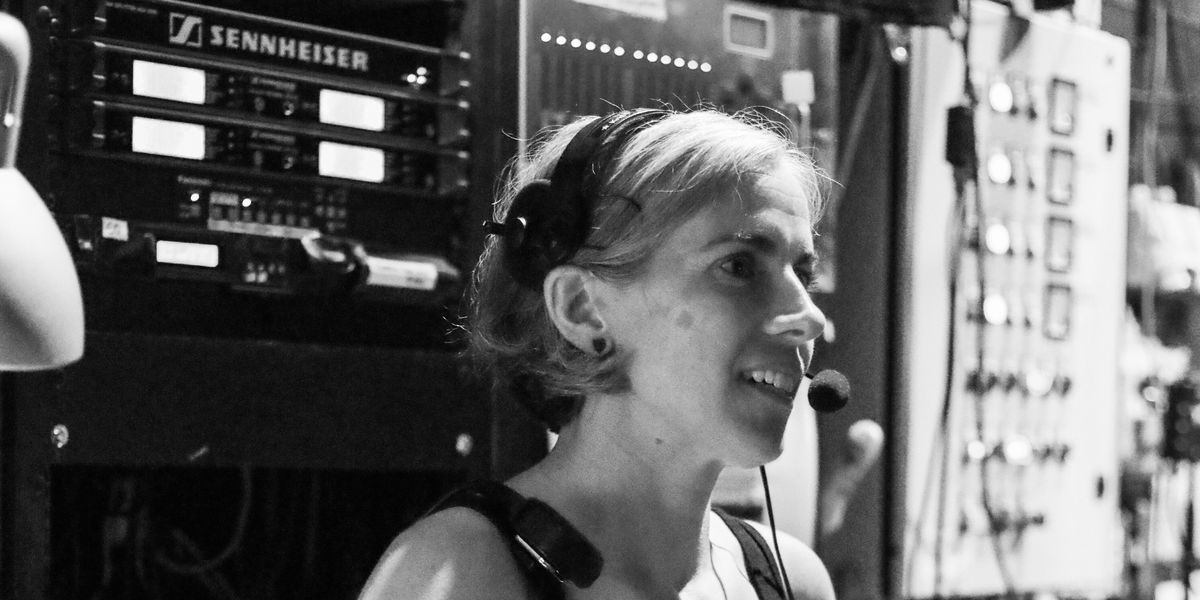 What Does It Take to Put on an Ailey Performance? We Spent a Day With Their Production Stage Manager

Watch any performance by Alvin Ailey American Dance Theater, and it’s impossible to deny the level of passion onstage.

But offstage, just past the wings, there’s another woman who’s passionately at work, clad in black and wearing a headset: Kristin Colvin Young, the company’s production stage manager.

After studying dance and sociology at Mount Holyoke College, she joined the company in 2000, as assistant stage manager, and has been an integral part of the Ailey family ever since. While Young’s job involves the responsibilities that immediately come to mind when you think of stage management—like calling the lights and sound during shows—her role encompasses everything from prepping casting inserts for programs to finalizing rehearsal schedules to giving preshow audience announcements as the “Voice of God.”

During a recent tour stop in Copenhagen, Denmark, Young documented what a typical performance day entails.

6:11am: Rise and shine, followed by breakfast at the hotel

7:40am: Walk to the theater in Tivoli Gardens

“Now that the stage soft goods and lighting booms have been set, we can spot potential safety issues with stage entrances and exits. Nicole A. Walters, assistant stage manager, and I use white gaff tape to create arrows on the floor to guide the dancers.” Touring internationally means getting used to different theaters quickly. “The off-stage space stage right and stage left is really tight and awkward. The console where we call the performance from is traditionally downstage right offstage of the first wing, but here we are midstage right off of the third wing. We also set up the studio for class with a portable Bose system and iPad to play rehearsal music.” 9:30am: Back in the production office

“I start typing the casting insert for the evening performance. The theater has created a gorgeous program, but it does not include casting credits. Each day I provide the theater with the casting sheet for the performance and they print enough copies for each patron.”

Associate artistic director Masazumi Chaya arrives, and Young meets with him in his dressing room to discuss the rehearsal schedule for the following day. “We have a deadline of 3pm to post the next day’s schedule, and it’s essential that I have Chaya sign off on the plan before he is engaged in rehearsals.” They also touch base on the company’s upcoming New York City Center season and the program that is being created to celebrate his retirement after 47 years.

10am: Dancers arrive for wardrobe fittings and settleinto dressing rooms

“While it’s relatively quiet I run to the canteen to make a plate from the salad bar, which I take back to the production office and eat while I continue with paperwork.”

“This is the first time since the world premiere at Lincoln Center that we have performed this piece. There are a few technical elements to sort out, since the original version had the opening solo danced on the orchestra pit downstage of the curtain.” There’s one problem: Tivoli Concert Hall doesn’t have an orchestra pit. “In addition to spacing the placement of the solo, we also have to rework the timing of a rail move because the theater has an automated traveler in place of a manual guillotine style that we would prefer.”

While the dancers continue to rehearse, Young heads back to the production office. She calculates the dancers’ overtime for the day and responds to several time-sensitive emails from Christopher Zunner, Ailey’s PR director. There are casting changes to address and details for next week’s tour stop in London to iron out.

“Thankfully I have more than a few minutes to spare so I am able to sit down and enjoy my meal. The food in the canteen is delicious, healthy and inexpensive! Tonight is chicken tikka masala, and I also make another large salad.”

6:30pm: One hour until showtime

“Back onstage, I make the hour call on radio (to the AAADT crew), over the paging mic (to the dressing rooms) and in-person onstage for anyone in earshot.” The next 30 minutes entail preshow checks for elements like lighting and sound.

“I check in with all department heads—sound, props, lighting and carpentry. When everyone confirms they are ready, the curtain is closed, and I inform house management we are ready to open the house.”

“I make the half-hour call on radio (to the AAADT crew), over the paging mic (to the dressing rooms) and in-person onstage for anyone in earshot. On the paging mic I remind everyone what the program is that evening, to check their costumes, that the hats for Members Don’t Get Weary are in the upstage crossover, there is one quick-change in the upstage left elevator and that all the ballets will be curtain after bows.” Then Young grabs her cue sheets and changes into her backstage attire of black pants and a black shirt. Young checks in with company manager Gregory Stuart, who is monitoring the front of house and the flow of patrons. Once the audience is settled, Young cues house lights to half and makes the VOG (“Voice of God”) welcome announcements from backstage. “I am in charge of the audience’s experience from the moment you sit down until the moment you leave the theater. I call the performance, giving cues that trigger the house lights, curtain, music, lights, etc. With the exception of the dancing, nothing happens without me giving a cue ending in ‘Go.’ ”

“I cue house lights out and the performance of EN begins.”

Revelations
is one of Young’s top five favorite Ailey ballets—”It is impossible to land on one single piece,” she says. “Even though I’ve called it hundreds of times for nearly two decades, I find something new each time. I like to watch the dancers grow with each role they dance. Each dancer is cast in several roles—one night they are dancing ‘Fix Me’ and the next they are dancing ‘Processional’ and ‘Sinner Man.’ Revelations centers me and brings me closer to Mr. Ailey and the legacy that I am honored to be a part of.”

Two Tivoli Garden Youth Guard do a special flower presentation in formal uniform. “This is just one of the amazing traditions that we love about this theater.” Then the curtain closes and Young cues the house lights up. The show is officially over.

10pm: Heading back to the hotel

“I leave the theater and take the long way through the Tivoli Gardens to exit and walk back to the hotel. The weather is perfect, and I enjoy taking my time to see the smiling people enjoying themselves in what is truly the happiest place on earth.”