“I’m going to end up in Timbuktu,” jokes Bailey Anne Vincent about navigating New York City’s bus system. The Washington-DC–based dancer, choreographer and director (of her multi-genre, body-positive Company360) instead opted for an Uber to meet her collaborator, BalletNext artistic director Michele Wiles, and me at a diner in midtown Manhattan.

In lamenting the buses’ challenges, Vincent’s complaint isn’t with their routes. Though you might never know it from conversing with her or watching her dance, she’s mostly deaf. She began losing her hearing in her teens due to a medical condition called atypical cystic fibrosis—a complicated diagnosis that impacts a number of her organs. But this hasn’t stopped Vincent from dancing. She trained at Rockbridge Ballet in Virginia before college and later danced with a small company in the DC-metro area. Now 31, Vincent has hardly slowed down. Her newest project, with Wiles as co-choreographer, incorporates ballet and American Sign Language (ASL). The two dancing directors presented a work-in-progress showing this week before its premiere in March at New York Live Arts. She and Wiles hope to bring inclusivity and awareness to the dance community regarding hearing-impaired needs, without sacrificing technical or artistic standards.

The two met through a “cold email” Vincent sent to Wiles in the fall. “I sound like a creepy stalker, but I was sort of a big dance nerd and a fan of BalletNext,” Vincent says. She floated the idea of creating a ballet incorporating ASL, but didn’t expect much of a reply. Wiles, however, was intrigued. The former ABT principal dancer doesn’t shy away from a challenge. Exhibit A: She left the premier company at the height of her career in 2011 to start her own troupe. Experimentation is one of Wiles’ primary tenets: “That’s why we’re here with BalletNext,” she says. “Because we want to take risks.”

The idea to integrate ballet and ASL felt organic. “It’s an advantage for BalletNext, for the choreography we’re doing. It’s inspiring me to make something in a new, unique way,” says Wiles. The yet-unnamed piece has five dancers, including Wiles, Vincent and members of BalletNext. 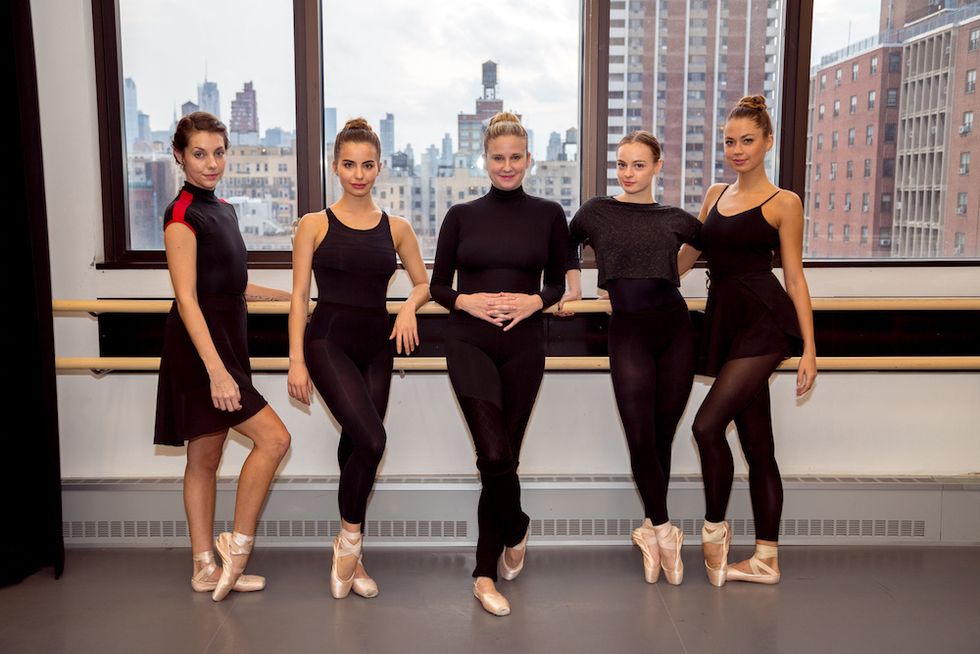 The process began with Vincent teaching a few ASL signs. For example, placing the index fingers next to each other and then moving them apart denotes a feeling of disconnectedness. A single finger held at the chest conveys the feeling of being alone. Adding ballet vocabulary, Vincent and Wiles paired “disconnect” with a piqué and “loneliness” with a soutenu. From there, they combined more signs and steps, elaborating on, repeating or chopping up certain phrases.

An internal metronome allows Vincent to dance in time without hearing the music, while in daily life, she gets by through lip-reading. When she’s choreographing, communicating details is easier with an interpreter. For this trip to New York City, Vincent’s friend and fellow dancer Emily Moran was able to help. She even interpreted Wiles’ and Vincent’s introductory comments for the audience at the showing.

Vincent equates the piece’s signing with poetry rather than prose. It deals with more abstract concepts—like being disconnected from others—rather than spelled-out storylines. Similarly, dance and ASL aren’t always literal. A single hand sign might represent an idiom rather than an exact translation of a word. Barring pantomime scenes, the language of ballet evokes feelings, not specific words.

Dancers have something to gain from practicing a non-verbal language. “Anyone these days can kick their leg up to their face,” says Vincent, but without épaulement and artistry, ballet can appear robotic. “In ASL, your face is your inflection.” She notes that posture and expression can turn a sign phrase—or a balletic step—from a soft question into an angry declaration.

In addition to incorporating ASL, Vincent and Wiles are challenging the idea that pointework and landing jumps should be soft and graceful. “We’re thinking of doing it a capella where the music completely cuts out, as if we were all not hearing,” says Wiles, “and the only way we can hear is by making these really loud pointe shoe sounds.” Even without hearing her shoe boxes hitting the floor, Vincent chimes in, “To be loud is liberating.”

Wiles and Vincent hope the emotional impact of their piece will resonate across audiences of varying abilities. Vincent believes it will be touching for deaf audience members: “It elevates this language that means so much to the deaf community.” For their hearing counterparts, Wiles says, “It’s going to open their eyes.”

Though piece is still in its early stages, Vincent feels that dancing and choreographing with a high-profile collaborator like Wiles is already building more awareness. Even little things like having a signer interpret curtain announcements is a good place to start. “Deaf culture can be very positive,” says Vincent. “Instead of having this thing taken away, we gain this beautiful visual language that’s so much like dance.”