When Raja Feather Kelly was in high school, his weekends consisted of shuttling between two opposing extracurricular activities: competitive dance and competitive speech and debate. 
Those formative experiences explain a lot about the visceral and cerebral artist Kelly has become, and the witty, wordy works he creates as the director of his own company, the feath3r theory, known in the dance world mostly for a series of droll and whimsical shows inspired by Kelly’s obsession with Andy Warhol. Recently, though, he has gained more attention for his contributions to several important plays—like the Pulitzer Prize–winning Fairview—where he meticulously distills human behavior.

Now, it seems, both communities are embracing his work for what it is: smart, a bit splashy and utterly singular. Kelly, 31, founded the feath3r theory a decade ago, but despite being presented in prestigious downtown venues like Danspace Project, accolades and big opportunities have only come recently. (Though they’ve come in a deluge, including Dance Magazine‘s inaugural Harkness Promise Award and three Princess Grace Awards.)

Kelly, now artistic director of the New Brooklyn Theatre, is concurrently participating in a two-year residency at New York Live Arts, with a premiere set for late 2020, and a three-year residency at HERE Arts Center, with a new work scheduled for spring 2021. Meanwhile, he’s heading into a laboratory period with the new musical Lempicka, about a famous Polish artist, which has its sights on Broadway next season. And this month, Kelly is both choreographing and directing the off-Broadway play We’re Gonna Die, by Young Jean Lee.

Kelly grew up in Fort Hood, Texas, where his mother was in the military, his father was not in the picture, and his grandmother was a pillar of stability. “Feather” is not a nickname or a stage name but a middle name that he’s always loved. “I’m very defensive of my name,” he says. He attended high school in New Jersey, where performance—in musicals, at dance competitions, on the debate stage—consumed him.

At Connecticut College, he studied dance and English, and discovered the avant-garde European dance-theater artists who inspired him: Jan Fabre, Maguy Marin and Wim Vandekeybus. (Jerome Robbins is also a hero.) And he found a mentor in the choreographer David Dorfman, who invited Kelly to join his company.

“I graduated at 12 pm and was in rehearsal at 2 pm,” Kelly says, still in disbelief.

He has also danced for Zoe Scofield, Christopher Williams, Kyle Abraham and Reggie Wilson. “He’s got a thinking mind and a thinking body, and when those things come together in performance, it’s really captivating,” Wilson says. Kelly also serves as Wilson’s company manager, one of many administrative positions he has held. “I think Raja likes wearing a lot of different hats,” Wilson says. 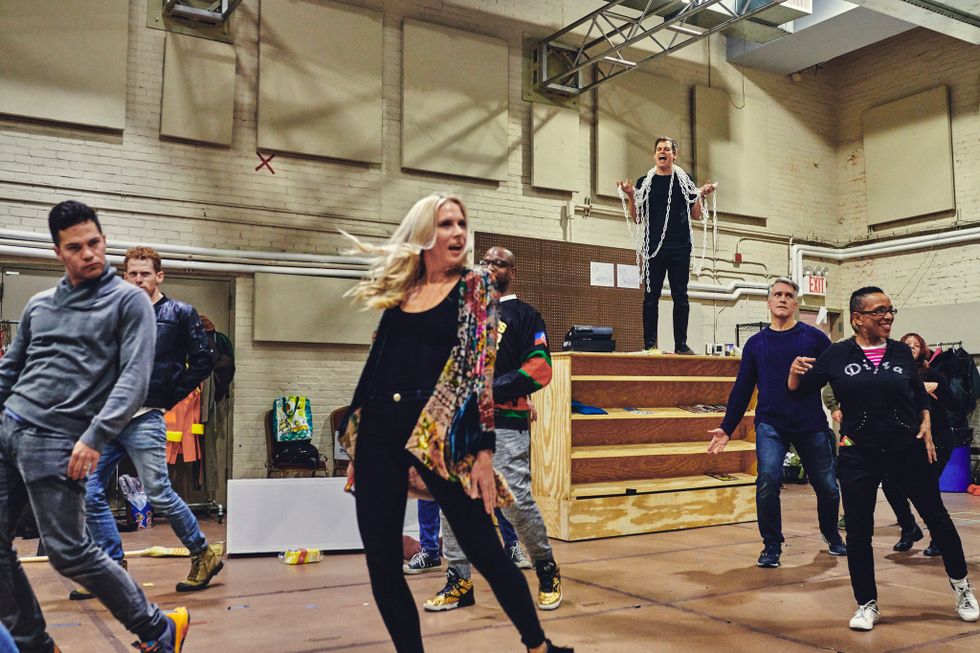 the feath3r theory in rehearsal for
We May Never Dance Again Kate Enman, Courtesy Kelly


Since last year, Kelly has largely stopped performing, in part because choreography excites him and now fills his schedule but also because he was never quite able to convince himself that he could cut it.

“I thought, I’m not good enough to do this,” he says. “I think I just perform well. People allow me to theatricalize things and then give me a pass on my technique.” The choreographers he has worked with adamantly disagree, but Kelly is stubborn in the exacting standards he has set for himself.

Those standards are clear in his own work, which, for the feath3r theory, consists of over a dozen dances that combine a colorful, surreal sensibility infused with exuberant movement and rhetorical ingenuity in the pursuit of intellectual insight into popular culture. That sounds brainy, but by riffing on A Chorus Line, taking inspiration from Lana Del Rey and Carly Rae Jepsen, and cladding his performers in all hues of paint and bodysuits, it’s also great fun.

“The thing that excites me about popular culture, and that relates to Andy Warhol, is that there’s this surface layer and then there’s this whole underground world,” he explains. “When I pick a topic, it’s like, Let’s just remove all of this surface and see what’s underneath.” Those topics include love and death and everything in between, explored in a maximalist, sometimes downright wacky style that at times verges on melodrama and camp until Kelly pulls the rug out and reveals the sincere emotions beneath.

“What I love about our work,” says Sara Gurevich, who has been part of the feath3r theory since 2015, “is that he’s constantly peeling back this superficial barrier between who we are inside the studio and who we are in the street.” She’s grateful for his honesty and praises the trust he’s built in the company. And, she adds, he’s always paying attention to their interactions. “He’s a keen observer of human dynamics.”

That quality has made Kelly a go-to choreographer for a number of theater directors who value his ability to draw out, then amplify, the physical essence of a character. His relationship to the theater world began in 2015 when the acclaimed playwright Branden Jacobs-Jenkins referred him to director Lila Neugebauer. Soon, Kelly’s name was being passed around and he was in the room with other major directors like Lileana Blain-Cruz, Rachel Chavkin and Sarah Benson.

“I don’t know anyone else who has such scope in their interest of micro-behaviors and epic spectacle,” says Benson, the director of Fairview, who also worked with Kelly on the zany one-off, off-Broadway Skittles Commercial. “I see him watch people, how they walk around the rehearsal room and eat their lunch. I see him pulling what’s already there into the choreography.”

In A Strange Loop, a self-referential musical by Michael R. Jackson that became a critical hit last summer, Kelly brought a flamboyance and humanity to the songs that matched the soaring spirit and pathos of the show (which Kelly imagined as a black, queer take on Beauty and the Beast‘s “Be Our Guest”).

“Raja’s work is seamlessly magical,” Jackson says, adding that he helps the cast “find their abilities without coddling them. I would say his approach with performers is to disarm and empower.” 
The appreciation he has received from the theater world—including his recent branding by a New York Times theater critic as “the hot dance master of the moment”—has been heartening, and a bit disorienting.

“It was very nice, and also kind of scary,” Kelly says of the Times shout-out. “I want to be grateful, because I am, but I also don’t want to be anything ‘of the moment’! I really want to have some longevity in my career.”

But the fact that theater people “respected what I did and understood what I did and were excited about what I did” led Kelly to consider whether that medium might be a better fit. After years of persistently and unsuccessfully writing grant applications—a process he has described with typical candor in this publication—and feeling ignored by New York dance presenters and critics, he figured he’d follow the path that was opening up in theater and leave downtown dance behind.

“Then downtown dance felt like they kind of changed their mind,” he says.

Almost all of the aforementioned awards and residencies have been bestowed in the past two years, a massive statement of validation from a community that has always felt like his original home, but one that misunderstood him. “I’m like, ‘Well this is weird!’ ” he says with a laugh. ” ‘I thought y’all hated me! I thought you were asking me to leave the scene.’ So I kinda started to.”

Maybe dance began to sense it was losing a vital voice. Or maybe it just takes time. “I feel like now people are starting to get it,” Kelly says, which he sees as a lesson in standing by your vision, and also being open to the unexpected paths it may take you down.

Whether in dance or in theater, the ultimate goal, though, is not the recognition. The goal is making a contribution to a broader dialogue of ideas. “If the world was a bunch of people sitting in a room, and you raise your hand, then you better have something interesting to say,” he says. “I want to raise my hand.”